ALMOST FAMOUS The New Musical is Coming to Broadway 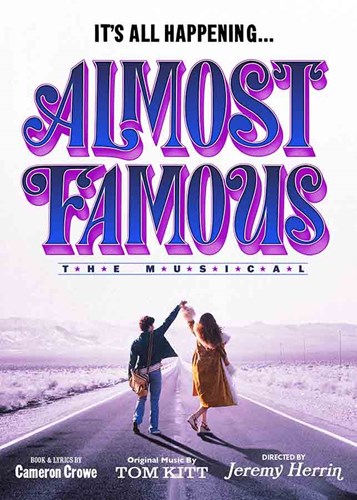 TO OPEN ON BROADWAY TUESDAY, OCTOBER 11 AT A SHUBERT THEATER (TBA)

New York, NY (June 2, 2022) – Producers Lia Vollack and Michael Cassel Group announced today that Almost Famous, the new musical with book and lyrics by Academy Award® and Grammy Award® winner Cameron Crowe, based on his iconic film, will open on Broadway this fall. Directed by Tony Award® and Olivier Award® nominee Jeremy Herrin, featuring original music and lyrics by Tony, Grammy, Emmy and Pulitzer Prize Award® winner Tom Kitt, and choreography by Sarah O’Gleby, the production will begin previews on Tuesday, September 13 ahead of an official opening on Tuesday, October 11 at a Shubert theater to be announced.

Sony Masterworks Broadway will release the Original Broadway Cast Album of Almost Famous this fall. Listen to the first track "Everybody's Coming Together" HERE and stay tuned for further song releases in the coming months.

In a statement, Cameron Crowe said, “Broadway fans and rock fans have so much in common. We obsess over the music, we pore over every possible recording we find, and we treasure those moments when an artist stands on a stage, opens their heart in that most personal way, and creates real magic. Suddenly everything seems possible. Almost Famous has always been about the power of that connection: hearing a piece of music for the first time, looking into a person’s eyes and feeling the electricity, finding your tribe. The line ‘it’s all happening’ has always been so key to the show, and now that we’re heading to Broadway, it’s finally come true. It actually is… all happening.”

The year is 1973 and it’s all happening. Led Zeppelin is king, Richard Nixon is President, and idealistic 15-year-old William Miller is an aspiring music journalist. When Rolling Stone magazine hires him to go on the road with an up-and-coming band, William is thrust into the rock-and-roll circus, where his love of music, his longing for friendship, and his integrity as a writer collide. Almost Famous is about a young man finding his place in the world and the indelible characters he meets along the way. It’s a celebration of community, family, fandom and the power of music.

When Almost Famous had its world premiere in Crowe’s hometown of San Diego at The Old Globe where it set the record for the highest-grossing show in the theater’s 90-year history, Charles McNulty of the Los Angeles Times called the production, “A shimmering and mesmerizing musical that is destined to conquer Broadway.

Cameron Crowe’s coming-of-age rock tale burns bright as Jeremy Herrin balances the thrill of performing in a rock band with the backstage rivalries and romances. Tom Kitt’s score, gorgeously sung by the top-notch cast, weaves an entrancing tapestry of sound that floats on a cloud of groovy rock.”

The San Diego Union-Tribune enthused, “Capturing a shining moment of youth, love, and music Almost Famous has one quality in particular that can boost a musical above the rest: an unabashedly big heart. Like the movie, it’s brimming with memorably off-kilter characters and unalloyed joy."

Variety raved “A love letter to music… Almost Famous feels uniquely real. Which it is, because Crowe lived it, and perfected it by revisiting the memories countless times since.”

Chris Wood (Russell Hammond) is an American actor and writer. He is best known for his portrayal of Mon-El in the hit CW series “Supergirl”. Prior to this, Wood led the CW's limited event series “Containment” which earned him a spot on Variety’s 2015 “10 TV Actors to Watch” list. Wood first came to notoriety for his villainous turn as Kai Parker on the hit CW series “The Vampire Diaries”. His additional credits include PBS' “Mercy Street”, the CW's “The Carrie Diaries” and HBO’s Emmy Award-winning series “Girls”. Wood is also the voice of He-Man/Prince Adam in the Netflix animated series “Masters of the Universe: Revelation”.

Anika Larsen (Elaine Miller) has performed on Broadway in Beautiful: The Carole King Musical, Avenue Q, Xanadu, All Shook Up and Rent. Off-Broadway, she was in Zanna, Don’t!, Myths and Hymns, Closer Than Ever, Miracle Brothers, How to Save the World…, Disaster! and Unbroken Circle. Anika grew up in Cambridge, MA with nine brothers and sisters from different races and countries, and she majored in theater at Yale University. She released an album of lullabies for all ages called Sing You to Sleep and she is a proud member of Actors’ Equity and the board of NYC Children’s Theater.

Casey Likes (William Miller) is honored to be a part of Almost Famous in his Broadway debut, returning to William after originating the role at The Old Globe. He’s performed since age 3 and is an award-winning director, writer, and producer. Upcoming he’ll be seen leading the MGM feature film Dark Harvest and portraying KISS legend Gene Simmons in Spinning Gold. He’s also a recent finalist of the NHSMTA (Jimmy Awards). Film: Everything Must Go. TV: “The Birch”, “Acts of Crime” (Dir. Sam Esmail), “American Blackout”. Regional: A Christmas Carol. He thanks his family, AZ, CESD, Jeff, and Dave.

Chad Burris (Vic) is so thrilled to be a part of this incredible company. Other Broadway credits include Mean Girls (Damian) and Frozen (Olaf) National Tour: The Book of Mormon Regional: Arkansas Rep, Cleveland Playhouse, Cape Playhouse, The Old Globe, and The Muny. TV/Film: “Evil”, Better Nate Than Never

Julia Cassandra (Estrella). Broadway debut! Recent credits include Almost Famous (The Old Globe) and the Farewell Tour of Mamma Mia!. Much gratitude to my family, the entire Almost Famous team, and Danny at Hudson Artists. All my love to Dustin.

Brandon Contreras (Silent Ed Vallencourt) is a NYC born & raised multi-hyphenate creative. As an actor, they’ve been seen in: World Premieres of Almost Famous (Old Globe) and Bhangin’ It! (La Jolla Playhouse), Road Show (Encores!), In the Heights (1st National), Jerry Springer: The Opera (The New Group), Beauty & the Beast (Drury Lane), The Play that Goes Wrong (Pioneer), The Hamilton Mixtape (Public Theater) and has worked at countless regional theaters around the country. TV Credits: "WeCrashed”, “Mr. Robot” and “Awkwafina is Nora from Queens”. Brandon is a freelance filmmaker/writer and a co-creator, writer and EP of the Queer sketch platform “The Homo Sapien Experience” featured on E! News, Queerty, and LogoTV.

Jana Djenne Jackson (Polexia). Broadway debut! Jana was most recently seen in Little Shop of Horrors in her Off-Broadway debut as the Urchin/Audrey Cover, Dance Captain, and OS singer. She made history as the first Black woman to play Audrey Off-Broadway. Now, she’s so excited to be making Broadway history in this fantastic show. Special thanks to her amazing agents at Buchwald, her friends and family that supported her through it all and her wonderful cast.

Katie Ladner (Sapphire) is excited to be back on Broadway with Almost Famous! Other Broadway credits include, Wicked (Shen-Shen, Madame Morrible u/s) and the revival of Andrew Lloyd Webber’s Sunset Boulevard starring Glenn Close (ensemble.) She was in the original Off-Broadway production of Heathers: The Musical (Martha) as well as the regional premieres of Disney’s Freaky Friday (Gretchen, Ellie u/s) and Be More Chill (Jenna) and can be heard on all three original cast recordings. All thanks to Mom and Dad, Victoria, Jamie, Sam, and her one hunk of a husband, Clayton! Proud Belmont University Alum! Galatians 1:3-5

Erica Mansfield (Swing, Dance Captain, u/s Elaine) was recently seen in the Broadway company of Mrs. Doubtfire understudying the role of Miranda Hilliard. Other Broadway credits include Kiss Me Kate, Bandstand, Finding Neverland, On the Town, On the Twentieth Century, Pippin, Evita, How to Succeed… and Broadway and Touring companies of Mamma Mia!. She has played Cassie in regional and touring companies of A Chorus Line, Donna Sheridan in Mamma Mia! (North Shore Music Theatre) and Lily in Annie (North Carolina Theatre) to name a few. FILM/TV credits include recurring as Tawny on “The Marvelous Mrs. Maisel” (Amazon Prime), “That Damn Michael Che” (HBOMax) and “Nurse Jackie” (Showtime).

Alisa Melendez (Swing). Broadway debut! Recently graduated from Pace University and is honored to have been with Almost Famous since 2019. A3 Artists Agency and Lakey Wolff Management.

Daniel Sovich (Darryl, u/s William) is the creator and lead singer of the band DISCOFOX down in Nashville, TN and will be making his Broadway debut in Almost Famous. Aside from writing and releasing music, which can be found at "https://linktr.ee/discofox", Sovich began his career as an actor in NYC with roles in The New Group's production of Downtown Race Riot as well as guest starring in the CBS productions "Blue Bloods" and "The Code". Daniel is repped with CESD Talent Agency as well as Authentic Talent and Literary Management.