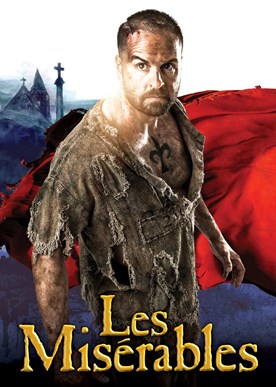 Boe is beloved by millions of Les Miz fans for his towering performance in the legendary 25th Anniversary Concert at London’s O2 Arena in October, 2010, which instantly turned him into a star.  The Evening Standard proclaimed, “Alfie Boe is a stunning Valjean.”  The legendary concert was subsequently released on DVD and Blu-Ray, selling millions of copies worldwide.  In 2011, Boe played a sold-out six-month engagement as Valjean in the original West End production of LES MISÉRABLES at the Queen’s Theatre.   His performances as ‘Valjean’ rapidly propelled him into a platinum-selling recording artist and a hugely-successful concert performer worldwide.

Widely-known as Britain’s favorite tenor, Boe hails from the Lancashire, England fishing port Fleetwood.  After studying and singing opera at London’s National Opera Studio and the Royal Opera House, Boe was chosen by director Baz Luhrmann to star as Rodolfo in his Broadway production of La Boheme.   He went on to release numerous highly-successful solo albums in the UK and the US and has toured extensively in both regions.

His newest solo album is Serenata, a collection of romantic Italian songs, which was released in November, followed by a highly-successful UK tour that concluded at the O2 Arena.   In July, Boe will co-star with Pete Townsend in his Classic Quadrophenia at London’s Royal Albert Hall.  His live opera appearances include The Pearl Fishers at the English National Opera and Romeo ET Juliette at the Royal Opera House.  He was recently featured in the popular ITV series “Mr. Selfridge” as music-hall singer Richard Chapman and released his autobiography, My Story.  In addition to his acclaimed performances as Valjean at the London O2 25th Anniversary Concert and in the West End production, Boe performed “Soliloquy (What Have I Done?)” as well as “Bring Him Home” with Colm Wilkinson, John Owen-Jones and Simon Bowman for Prince Charles and the Duchess of Cornwall as part of the Royal Variety Performance in 2010. In 2012 he performed at the Queen’s Diamond Jubilee.   www.alfie-boe.com

While the original London production of LES MISÉRABLES prepares to celebrate its record-breaking 30th Anniversary on October 8th of this year, the new version of the show is making history playing to packed houses on Broadway, and in Australia, Japan, South Korea and Spain.  In 2015, all four of Mackintosh’s ‘mega-hits’ were back in London’s West End:  the original productions of Les Misérables and The Phantom of the Opera, the smash hit new production of Miss Saigon, now in its second year, and the limited return engagement of Cats.

The original New York production of LES MISÉRABLESpremiered first at the Broadway Theatre on March 12, 1987, later moving to the Imperial on October 17, 1990, where it played until May 18, 2003, for a total Broadway run of 6680 performances.   LES MISÉRABLES is the 5th longest-running Broadway production of all time.

Alfie Boe will not perform in LES MISÉRABLES October 27 through November 1 due to prior commitments.