'A View from the Bridge' at the Lyceum 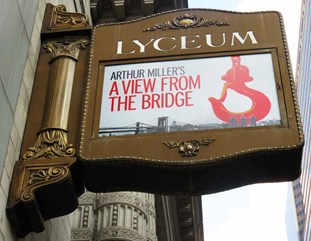 IS COMING TO BROADWAY THIS FALL

Direct from two completely sold-out engagements in London, producers Scott Rudin and Lincoln Center Theater will bring the Young Vic’s critically-acclaimed production of Arthur Miller’s A VIEW FROM THE BRIDGEto Broadway this fall.  The production, which swept the 2015 Olivier Awards — winning for Best Revival, Best Director, and Best Actor (Mark Strong) —will begin previews Wednesday evening, October 21 and open on Thursday, November 12 at the Lyceum Theatre, 149 West 45 Street.  A VIEW FROM THE BRIDGE will play an 18-week limited engagement through Sunday, February 21, 2016.

The cast of A VIEW FROM THE BRIDGE — Arthur Miller’s dark and passionate classic drama set on the Brooklyn waterfront — will be headed by Mark Strong (as Eddie Carbone), Nicola Walker (as Eddie’s wife Beatrice), Phoebe Fox (as his niece Catherine), Emun Elliott (as Marco), and Michael Gould (as Alfieri). The production has scenic and lighting design by longtime van Hove collaborator Jan Versweyveld and costume design by An D’Huys. Additional casting and design team will be announced at a later date.

The Young Vic production of A VIEW FROM THE BRIDGE premiered in April 2014 to ecstatic reviews and instantly sold out its initial engagement. The production subsequently transferred to London’s West End where it recently concluded another completely sold-out run.

A VIEW FROM THE BRIDGE received unanimous raves from the London critics. The Guardian described it as “a visceral, vital reinterpretation of a classic play . . . a forceful production of visual brilliance,” adding, “there have been plenty of productions of A View from the Bridge but you’ve never seen it staged like this.” The Financial Times called the show “a superb, searing production. The actors are all magnificent.” The production was also hailed by The Independent as “unforgettable,” and by the Evening Standard as “astonishingly bold and magnificent.” The Variety called it “Entrancing and electrifying. A catharsis only theatre can muster. You daren’t blink. This is theatre as an out of body experience.”

Acclaimed Belgian director Ivo van Hove will make his Broadway debut with A VIEW FROM THE BRIDGE. The New York Times says “van Hove brings us so close to a work’s white-hot emotional center that it burns as it never has before.” As General Director since 2001 of Holland’s leading theatre company Toneelgroep Amsterdam, he has staged many internationally acclaimed productions, including, in New York: Susan Sontag’s Alice in Bed, More Stanley Mansions (Obie Award), A Streetcar Named Desire, Hedda Gabler (Obie Award), The Misanthrope, The Little Foxes, and this season’s Scenes from A Marriage at the New York Theatre Workshop; Roman Tragedies, Cries and Whispers, Opening Night, and Angels in America at BAM; and Teorema at the Lincoln Center Festival. His most recent production is Antigone, starring Juliet Binoche, which opened in Amsterdam in February before embarking on an international tour. van Hove’s opera credits include the premiere of composer Charles Wuorinen’s adaptation of Annie Proulx’s Brokeback Mountain atTeatro Real in Madrid, as well as productions of The Clemency of Titus, Idomeneo, Mazeppa, Verdi's Macbeth, Iolanta, The Makropulos Case, Lulu, and The Ring Cycle.

2015 marks the centenary of ARTHUR MILLER’s (1915-2005) birth. He was born in New York City and studied at the University of Michigan. His plays include All My Sons, Death of a Salesman, The Crucible, A View from the Bridge, A Memory of Two Mondays, After the Fall, Incident at Vichy, The Price, The Creation of the World and Other Business, The Archbishop’s Ceiling, The American Clock,and Playing for Time. Later plays include The Ride Down Mt. Morgan, The Last Yankee, Broken Glass, Mr. Peters’ Connections, Resurrection Blues,and Finishing the Picture. Other works include the novel Focus, the screenplay The Misfits,and the books In Russia, In The Country, and Chinese Encounters, three books in collaboration with his wife, photographer Inge Morath. His memoir, Timebends: A Life, was published in 1987. Among many other awards, he won the Pulitzer Prize for Drama in 1949 for Death of a Salesman.