A STRANGE LOOP to Open at Broadway's Lyceum Theatre 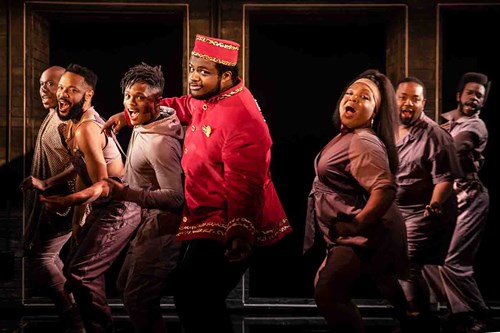 TO OPEN AT BROADWAY’S LYCEUM THEATRE

A STRANGE LOOP is currently playing a critically acclaimed run at Woolly Mammoth Theatre Company in Washington DC, where it has been extended through January 9, 2022.

Michael R. Jackson’s Pulitzer Prize-winning, blisteringly funny masterwork exposes the heart and soul of a young artist grappling with desires, identity, and instincts he both loves and loathes. Hell-bent on breaking free of his own self-perception, Usher wrestles with the thoughts in his head, brought to life on stage by a hilarious, straight-shooting ensemble. Bold and heartfelt in its truth-telling, A STRANGE LOOP is the big, Black, and queer-ass Great American Musical for all.

Reviewing the current run of A STRANGE LOOP at the Woolly Mammoth Theatre Company, Peter Marks of The Washington Post describes Jackson’s musical as “marvelously inventive, exhilarating, and beautifully staged by director Stephen Brackett and choreographer Raja Feather Kelly.” He writes, “There is so much to raise the spirits here. The score, played by a five-member band conducted by music director Rona Siddiqui, boils and bubbles in an ecstatic cascade of musicality.”

John Stoltenberg of DC Metro Theater Arts calls A STRANGE LOOP a “knockout smash” and writes, “In thematic dimensionality and depth, raw candor, and meta-theatricality, A STRANGE LOOP is beyond compare.”

Michael R. Jackson was awarded the 2020 Pulitzer Prize in Drama for A STRANGE LOOP.

A STRANGE LOOP made its world premiere at Playwrights Horizons in May 2019 to sold-out crowds. The show quickly became a critical favorite, praised as “exhilarating and wickedly funny” by New York Magazine’s Sara Holdren and “some of the most vital work in American theater” by The New York Times’ Wesley Morris. Following the successful run, A STRANGE LOOP was the recipient of five Drama Desk Awards, two Lucille Lortel Awards, six Outer Critics Circle honors, two Obie awards, one Off-Broadway Alliance Award, and the New York Drama Critics Circle Award for Best Musical.  Playwrights Horizons’ original cast recording of A STRANGE LOOP is available on Yellow Sound.

MICHAEL R. JACKSON'S (Playwright, Composer, Lyricist) 2020 Pulitzer Prize and New York Drama Critics Circle winning A STRANGE LOOP (which had its 2019 world premiere at Playwrights Horizons in association with Page 73 Productions) was called "a full-on laparoscopy of the heart, soul, and loins" and a "gutsy, jubilantly anguished musical with infectious melodies" by Ben Brantley for The New York Times. In The New Yorker, Vinson Cunningham wrote, "To watch this show is to enter, by some urgent, bawdy magic, an ecstatic and infinitely more colorful version of the famous surreal lithograph by M. C. Escher: the hand that lifts from the page, becoming almost real, then draws another hand, which returns the favor."  In addition to A STRANGE LOOP, he also wrote book, music and lyrics for White Girl in Danger. Awards and associations include: a New Professional Theatre Festival Award, a Jonathan Larson Grant, a Lincoln Center Emerging Artist Award, an ASCAP Foundation Harold Adamson Award, a Whiting Award, the Helen Merrill Award for Playwriting, an Outer Critics Circle Award, a Drama Desk Award, an Obie Award, an Antonyo Award, a Fred Ebb Award, a Windham-Campbell Prize, a Dramatist Guild Fellowship and he is an alum of Page 73’s Interstate 73 Writers Group.   @thelivingmj (Twitter), @thelivingmichaeljackson (Instagram) www.thelivingmichaeljackson.com

RAJA FEATHER KELLY (Choreographer) is a choreographer, a director, and the artistic director of the feath3r theory. He is a three-time Princess Grace Award winner (2017, 2018, 2019), two-time Lucille Lortel Award nominee (2019, 2020), and 2019 Chita Rivera Award nominee. In 2020 he was the Obie Award winner and Outer Critics Circle Award honoree for choreography for the Pulitzer-winning musical A Strange Loop. In 2019 he was an SDCF Joe A. Callaway Award finalist for both A Strange Loop and the Pulitzer-winning play Fairview. Raja is also the 2019–2020 Randjelović/Stryker Resident Commissioned Artist at New York Live Arts, an inaugural Jerome Hill Artist Fellow, and a 2019 Creative Capital award recipient. He is a current fellow of HERE Arts, the Center for Ballet and the Arts at NYU, and a Creative Associate at The Juilliard School. Over the past decade, Kelly has created fifteen evening-length premieres with his company the feath3r theory as well as directing and choreographing extensively for Off-Broadway theatre in New York City. His choreography has also garnered a 2018 Breakout Award from the Stage Directors and Choreographers Foundation (SDCF) and the Solange MacArthur Award for New Choreography (2016), and he was Dance Magazine's inaugural Harkness Promise Award (2018).

PAGE 73 PRODUCTIONS A STRANGE LOOP made its world premiere at Playwrights Horizons produced in association with Page 73 Productions in May 2019 to sold-out crowds. The show quickly became a critical favorite, praised as “exhilarating and wickedly funny” by New York Magazine’s Sara Holdren and “some of the most vital work in American theater” by The New York Times’ Wesley Morris. Following the successful run, A STRANGE LOOP was the recipient of five Drama Desk Awards, two Lucille Lortel Awards, six Outer Critics Circle honors, two Obie awards, one Off-Broadway Alliance Award, and the New York Drama Critics Circle Award for Best Musical. Playwrights Horizons’ and Page 73's original cast recording of A STRANGE LOOP is available on Yellow Sound.

WOOLLY MAMMOTH THEATRE COMPANY creates badass theatre that highlights the stunning, challenging, and tremendous complexity of our world. For over 40 years, Woolly has maintained a high standard of artistic rigor while simultaneously daring to take risks, innovate, and push beyond perceived boundaries. Co-led by Artistic Director Maria Manuela Goyanes and Managing Director Emika Abe, Woolly is located in Washington, DC, equidistant from the Capitol Building and the White House. This unique location influences Woolly’s investment in actively working towards an equitable, participatory, and creative democracy.  One of the few remaining theatres in the country to maintain a company of artists, Woolly serves as an essential research and development role within the American theatre. Plays premiered here have gone on to productions at hundreds of theatres all over the world and have had lasting impacts on the field. These include the world premiere productions of Danai Gurira’s Eclipsed in 2009 that later went on to be the first Broadway play with a cast & creative team of all Black women; Bruce Norris’ Pulitzer-Prize Winner Clybourne Park in 2010; and Anne Washburn’s Mr. Burns: a post-electric play in 2012. Woolly produces theatre beyond our building by sending productions like Aaron Posner’s Stupid Fucking Bird across the nation and bringing Aleshea Harris’s What to Send Up When It Goes Down to neighborhoods throughout DC. A national tour of Madeline’s Sayet’s Where We Belong will launch in 2021. In addition, Woolly was the first to pioneer Pay-What-You-Will tickets in the DMV, which are now available at every single performance.  Woolly Mammoth acknowledges that the theatre stands upon occupied, unceded territory: the ancestral homeland of the Nacotchtank whose descendants belong to the Piscataway peoples. Furthermore, the foundation of this city, and most of the original buildings in Washington, DC, were funded by the sale of enslaved people of African descent and built by their hands. Understanding that history and context, Woolly values building relationships with neighbors and resident artists in the DMV area. Our nationally acclaimed Connectivity Department is one of the ways we accomplish this by linking Woolly to like-minded community organizations in order to generate mutually beneficial, impact and power-aware partnerships.

PLAYWRIGHTS HORIZONS is dedicated to cultivating the most important American playwrights, composers, and lyricists, as well as developing and producing their bold new plays and musicals. Adam Greenfield became Artistic Director in 2020; Leslie Marcus has served as Managing Director since 1993. Following its 50th anniversary season, Playwrights builds upon its diverse and renowned body of work, counting 400 writers among its artistic roster. In addition to its onstage work each season, Playwrights’ singular commitment to nurturing American theater artists guides all of the institution’s multifaceted initiatives: our acclaimed New Works Lab, a robust commissioning program, an innovative curriculum at its Theater School, and more. Robert Moss founded Playwrights in 1971 and cemented the mission that continues to guide the institution today. André Bishop served as Artistic Director from 1981–1992. Don Scardino succeeded him and served until 1996. Tim Sanford, the organization’s longest-serving Artistic Director, held the position from 1996-2020. Over its 50-year history, Playwrights has been recognized with numerous awards and honors, including seven Pulitzer Prizes, 13 Tony Awards, and 47 Obie Awards.