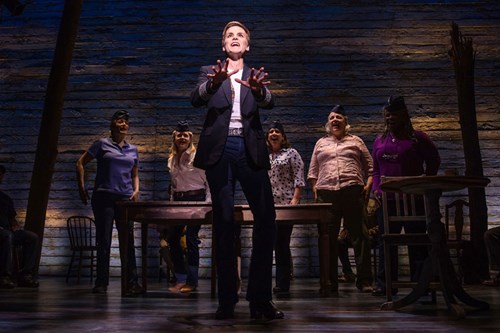 A Pioneering Pilot, a Broadway Show and a Life-Changing Bond

She was a girl who dreamed of flying. A woman who broke barriers in commercial avaiation. And then a pilot ordered to divert a trans-Atlantic jet to Gander, Newfoundland, during the unfolding terror of Sept. 11, 2001.

Beverley Bass had an unusual story to tell when a pair of dramatists started researching the encounter between stranded air travelers and small-town Canadians in those days after the attacks. And now she has another unusual story, as she stares over and over again into a heart-tugging piece of musical theater, and sees her own life mirrored back.

The pioneering pilot and the actress who portrays her in the Broadway musical “Come From Away” have developed a bond over the last two years, ever since they first met, at a restaurant in San Diego, when Ms. Bass jocularly said to the actress, Jenn Colella, “I think you’re playing me.”

Ms. Colella is both playing Ms. Bass, and, frequently, playing to Ms. Bass, who has seen the show 61 times. Using her free-flying privileges as a now-retired pilot, she has followed the musical’s developmental journey from La Jolla to Seattle to Washington to Gander to Toronto to New York, often with other female pilots in tow. Ms. Bass is both watching the show and reliving the events, clutching her husband’s hand as the emotions return.