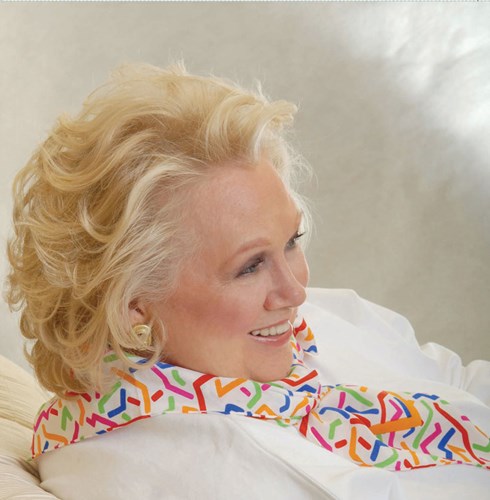 A Broadway legend returns to the stage this spring

Barbara Cook: Then and Now

“A transcendent American voice shares the wisdom she has gained in her well-lived years with a tenderness and honesty that could break your heart and mend it all at once.” – Stephen Holden, The New York Times

Producer Roy Furman, in association with Sandy Robertson and Luigi Caiola, is proud to announce the return to the stage of one of the greatest voices and storytellers of our time. The legendary Tony and Grammy Award winner Barbara Cook will share the stories and songs that shaped her life and career in Barbara Cook: Then and Now, a candid and intimate evening conceived by 3-time Tony Award winner James Lapine and directed by 10-time Tony Award winner Tommy Tune.

Hers is a voice that’s become a constant in musical theatre for over 50 years. From the striking ingénue of Broadway’s Golden Age, to the legendary performer of the 21st century, Barbara Cook has sold out theaters and concert halls around the world with her masterful interpretations of music’s most memorable songs. This spring, she shares the best story of all - her own - in what promises to be a unique and intimate evening filled with music and memories to last a lifetime.

Together with a little help from her multiple Tony Award-winning friends, director Tommy Tune and playwright James Lapine, she returns to the stage in Barbara Cook: Then and Now, a poignant one-woman performance that takes you on a vibrant and candid journey through her remarkable life. Discover the people and the moments, the challenges and the triumphs that shaped her life - in a one-of-a-kind musical memoir you will never forget.

Barbara Cook’s anticipated autobiography bearing the same title, Barbara Cook: Then and Now, will be released by HarperCollins Publishers in June.

“As I began to write my upcoming memoir, I was surprised by how moved I was in revisiting my early years and later my alcoholic years,” Barbara Cook said, “I’ve always felt that the narrative of my life came through many of the songs I sing, both tunes I’ve introduced and favorites that have spoken to me through different chapters of my life. I’m hoping this evening will be a live companion piece to the book that taught me more about my own life than I ever would have expected.”

Audience Rewards® is the Official Rewards Program of Broadway & the Arts™. It’s a standing ovation for ticket buyers across the nation.  Earn valuable ShowPoints every time you buy tickets to participating theatrical productions, live entertainment, exhibitions and more. Save money by redeeming ShowPoints for free tickets to the events you love or, even better, securing unique experiences and merchandise exclusively curated for Audience Rewards® members. It’s free and fast to join.  Visit www.AudienceRewards.com to sign up and purchase.

BARBARA COOK’s silvery soprano, purity of tone, and warm presence have delighted audiences around the world for more than 50 years. Considered “Broadway’s favorite ingenue” during the heyday of the Broadway musical, Miss Cook then launched a second career as a concert and recording artist soaring from one professional peak to another. Whether on the stages of major international venues or in the intimate setting of New York’s famed Café Carlyle, Barbara Cook’s popularity continues to thrive - as evidenced by a succession of seven triumphant returns to Carnegie Hall (most recently her celebratory 85th Birthday concert) where she made her legendary solo concert debut in 1975, and an ever-growing mantle of honors including the Tony, Grammy, Drama Desk and New York Drama Critics’ Circle Awards, her citation as a Living New York Landmark and her induction into the Theatre Hall of Fame. The recipient of the 2011 Kennedy Center Honor, in 2010 Miss Cook returned to the Broadway stage after a 23-year absence, and was nominated for a Tony Award for her performance, in the musical Sondheim on Sondheim, directed by James Lapine. Ms. Cook’s New York appearances also include an appearance with the New York Philharmonic at Avery Fisher Hall, a reprise of her three sold out 80th Birthday concerts in 2007, and a critically acclaimed show Here’s To Life at Feinstein’s at the Regency. In the past several years Ms. Cook also made an historic solo concert debut at New York’s Metropolitan Opera House, where she became the first female solo pop singer to be presented in concert by the MET. Miss Cook won a New York Drama Critics’ Circle Award and was nominated for a Drama Desk award for her concert Barbara Cook’s Broadway and was nominated for Tony and Drama Desk Awards for her previous concert, Mostly Sondheim. Her many Broadway credits include the creation of three classic roles in the American musical theater: “Cunegonde” in Leonard Bernstein’s Candide, “Marian the Librarian” in Meredith Willson’s The Music Man (Tony Award) and “Amalia” in Bock and Harnick’s She Loves Me (Drama Desk Award). In 1975 she made her Carnegie Hall debut which was preserved as the live recording, Barbara Cook at Carnegie Hall. She then embarked on a second career as a concert and recording artist performing in most of the country’s major concert halls and cabarets. In 1987 she won a Drama Desk Award for her Broadway show, A Concert for the Theatre. Her many London appearances include: her Gala 1997 Birthday Concert with the Royal Philharmonic at the Royal Albert Hall; appearances with the London Symphony Orchestra at the Barbican; engagements at the Donmar Warehouse Theatre, and Sadler’s Wells; and Olivier Award-nominated appearances at the Albery Theatre, at the Lyric Theatre with Mostly Sondheim, two engagements of Barbara Cook’s Broadway, and recently an appearance with the English National Ballet in an all-Gershwin evening at the Royal Albert Hall. A Grammy Award winner, her recordings include eight original Broadway cast albums, two Ben Bagley albums of songs by Jerome Kern and George Gershwin, an album entitled Songs of Perfect Propriety, featuring poems by Dorothy Parker set to music by Seymour Barab, As of Today (Columbia) and The Disney Album (MCA). Her more recent recordings for DRG Records include: Close as Pages in a Book, Barbara Cook: Live From London, Oscar Winners: The Lyrics of Oscar Hammerstein, All I Ask Of You, The Champion Season: A Salute to Gower Champion, Mostly Sondheim, Barbara Cook’s Broadway, the Grammy nominated Count Your Blessings, Tribute, The Live Performance CD, Barbara Cook at the Met, No One Is Alone and Rainbow ’Round My Shoulder. DRG Records released a boxed set of her recordings entitled The Essential Barbara Cook.

JAMES LAPINE has worked with Stephen Sondheim on Sunday in the Park with George, Into the Woods and Passion.  He also recently directed Act One, Annie and Sondheim on Sondheim on Broadway as well as Merrily We Roll Along for Encores!. With William Finn he has worked on Falsettos, A New Brain, The 25th Annual Putnam County Spelling Bee and Little Miss Sunshine.   Other Broadway credits include The Diary of Anne Frank, Golden Child and Amour. He has written the plays Table Settings, Twelve Dreams, Luck, Pluck & Virtue, The Moment When, Fran’s Bed and Mrs. Miller Does Her Thing.  For the New York Shakespeare Festival he directed A Midsummer Night's Dream, The Winter’s Tale and King Lear. He has received 11 Tony Award nominations, winning 3 times. He also won 5 Drama Desk Awards and the Pulitzer Prize for Drama for Sunday in the Park with George. In 2011, he was inducted into the Theater Hall of Fame and in 2015 was the recipient of the Mr. Abbott Award presented by the Society of Stage Directors and Choreographers for a lifetime of exceptional achievement in the theatre JamesLapine.com.

TOMMY TUNE is one of the country’s most prolific performer / director /choreographers and is celebrating his golden decade on the great American stage. He has received 10 Tony Awards, which includes the 2015 Tony for Life Achievement in the Theatre, The National Medal of Arts, 8 Drama Desk Awards, 3 Astaire Awards, and multiple Life Time Achievement Awards including the Society of Directors and the Choreographers’ George Abbott Award. A native Texan, Mr. Tune began his career as a dancer in the Broadway shows Baker Street, A Joyful Noise and How Now Dow Jones. He has received Tony Awards for The Will Rogers Follies (Direction and Choreography), Grand Hotel (Direction and Choreography), My One and Only (Actor in a Musical and Choreography), Nine (Direction), A Day in Hollywood/A Night in the Ukraine (Choreography) and Seesaw (Featured Actor in a Musical). Tune received two Tony nominations (Direction and Choreography) for The Best Little Whorehouse In Texas. Film credits include Hello Dolly, The Boy Friend, and Mimi Bluette…fiore del mio giardino, and in 1999, he made his Las Vegas debut as the star of EFX at the MGM Grand Hotel.  Tune is the recipient of the National Medal of Arts, the highest honor for artistic achievement given by the President of the United States, and he has been honored with his own star on the legendary Hollywood Walk of Fame and was inducted into The Theater Hall of Fame by Gwen Verdon.  In 2009 the New York Landmarks Conservancy designated Mr. Tune as a Living Landmark. In early 2015 Tune received rave reviews for his tap dancing and singing role in the Encores! production of Lady, Be Good! at New York City Center. He is currently touring the country in his one-man show, Tommy Tune, Tonight!