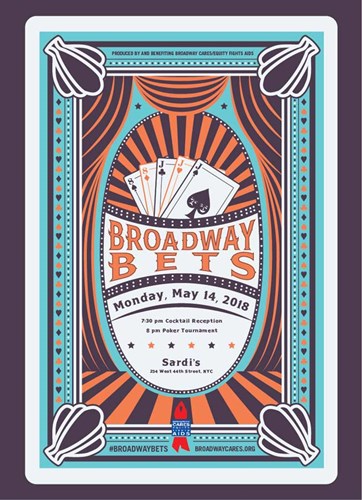 High energy, enthusiasm and a night of incredible fundraising were dealt in spades when Broadway stars, industry insiders and fans raised a record $295,100 for Broadway Cares/Equity Fights AIDS on Monday, May 14, 2018, at the fourth edition of Broadway Bets,

The jaw-dropping total was raised in a spirited evening of Texas Hold ‘em poker at Sardi’s restaurant in the heart of New York City’s theatre district. Broadway Bets gives theatre professionals and loyal Broadway Cares supporters the opportunity to participate in a friendly poker tournament while helping people in need across the country.

Stars who did not go “all in” but instead enjoyed Broadway Bets social passes, which included snacks, socializing and blackjack, craps and roulette for prizes, were actors Lilli Cooper, Robert Creighton, Laurie Metcalf and Danny Skinner.