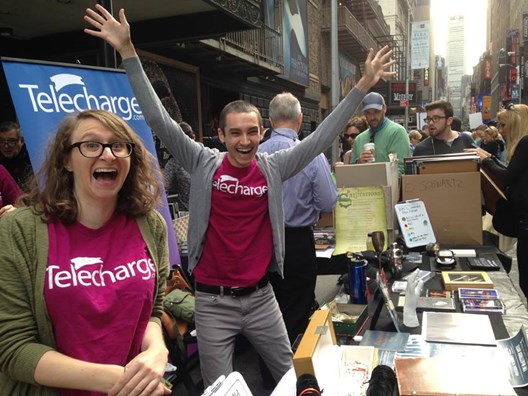 The biggest day of the year for Broadway fans will return Sunday, September 25, 2016, as the 30th annual Broadway Flea Market & Grand Auction makes an encore appearance in Shubert Alley and, for the first time, will stretch along West 45th Street as well as its traditional home on West 44th Street, between Seventh and Eighth Avenues.

Produced by and benefiting Broadway Cares/Equity Fights AIDS, the Broadway Flea Market & Grand Auction (#BroadwayFlea) is a free, once-a-year outdoor theatre bazaar. Tens of thousands of Broadway fans will celebrate by bidding on and buying everything from one-of-a-kind show props to tickets to opening night performances, from autographed musical phrases to once-in-a-lifetime theatrical experiences.

The Broadway Flea Market & Grand Auction will run from 10 am to 7 pm. New silent auctions start every 30 minutes throughout the day; the live auction begins at 5 pm. For the first time in several years, the Grand Auction will be back in Shubert Alley.

And for the first time ever, the flea market will stretch the length of West 45th Street between Seventh and Eighth Avenues, in addition to its traditional place in the same block of West 44th Street. The always popular autograph table and photo booth will once again be on the outdoor deck of Junior's restaurant on West 45th Street at the entrance to Shubert Alley.

"With the ongoing construction in the pedestrian plazas of Times Square, we're taking the opportunity this year to fill the heart of the Theatre District with the Broadway Flea Market & Grand Auction," said Tom Viola, executive director of Broadway Cares/Equity Fights AIDS. "Surrounded by many of Broadway's most historic houses, we'll all feel right home for the biggest day for Broadway fans."

Shows and organizations participating in the flea market, items to be offered in the grand auction and stars set to appear at the autograph table & photo booth will be announced in September.

Broadway Cares/Equity Fights AIDS is one of the nation's leading industry-based, nonprofit AIDS fundraising and grant-making organizations. By drawing upon the talents, resources and generosity of the American theatre community, since 1988 BC/EFA has raised more than $285 million for essential services for people with AIDS and other critical illnesses across the United States.

Broadway Caresis the major supporter of the social service programs at The Actors Fund, including the HIV/AIDS Initiative, the Phyllis Newman Women's Health Initiative and the Al Hirschfeld Free Health Clinic, and awards annual grants to more than 450 AIDS and family service organizations in all 50 states.