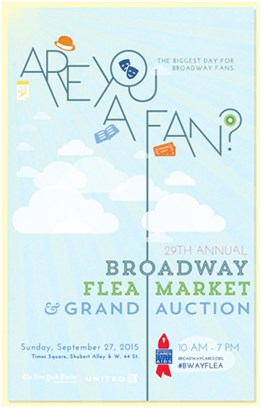 Broadway fans celebrated the 29th Annual Broadway Flea Market & Grand Auction by bidding on and buying everything from tickets to a bevy of opening night performances to custom-made music mixes, from autographed musical phrases to once-in-a-lifetime theatrical experiences. The result: a record $756,655 was raised for Broadway Cares/Equity Fights AIDS.

The biggest day of the year for Broadway fans brought tens of thousands of theatre lovers into Times Square, Shubert Alley and onto West 44th Street on Sunday, September 27, 2015. They were greeted by 74 tables full of Broadway treasures and 68 of Broadway’s brightest stars at the Autograph Table and Photo Booth. In addition, more than 200 auction lots were offered in live and silent auctions throughout the day.

The 29 editions of the Broadway Flea Market & Grand Auction (#bwayflea) have raised a grand total of $11.8 million.

“It’s so moving and invigorating to see actors, stage managers, producers, theatrical unions and fans alike come together to browse through those old Playbills, compete for auction treasures, meet Broadway's best and celebrate their love of Broadway,” said Tom Viola, executive director of Broadway Cares/Equity Fights AIDS. “It’s hard to believe that all this started 29 years ago with a few simple tables hastily set up outside the Shubert Theatre stage door in 1987 by the cast of the original production of A Chorus Line. Theysold things they found in their dressing rooms, doing what they could to help raise money for those living with AIDS and in desperate need. Everything sold and auctioned this Sunday, as it was then, helps Broadway Cares continue to provide essential, lifesaving support to those in our community and across the country who need our help facing a variety of health issues and personal challenges.”

Fans had an opportunity to add a wide range of items to their theatrical treasure chests: costume pieces, vintage Playbills and show posters, CDs and collectible records, costume sketches and even flash drives with custom music mixes by Hamilton creator and star Lin-Manuel Miranda.

The day concluded under the bright lights of Times Square with a spirited live auction that raised a record $295,500.

The most popular lots of the live auction were once-in-a-lifetime walk-on roles in many of Broadway’s biggest hits. The top-selling lot of the day left its winning bidder saying “yeah” to an appearance onstage in Kinky Boots, which raised $13,000. Other favorites included a journey to Oz in Wicked, which went for $11,500, the ultimate Les Misérables experience with a high bid of $10,000, an appearance in Chicago that went for $8,500 and a walk-on role in Beautiful - The Carole King Musical that raised $7,500. In all, the opportunities to appear in Broadway shows raised $84,000.

Also popular were VIP tickets and backstage meet-and-greets with cast members of this season’s first smash hit Hamilton. Three different packages offering the chance to meet Miranda, Leslie Odom Jr. and Jonathan Groff, sold for a collective $16,950. The “Ultimate Seth” experience with SiriusXM host Seth Rudetsky went to three lucky winners for $6,000 and a visit to the set of the ABC hit Nashville sold for $6,250.

Earlier in the day, actors Stephen Wallem (Nurse Jackie) and Kirsten Wyatt (A Christmas Story) co-hosted the silent auction, which featured 132 items in groups that rotated every 30 minutes. The silent auction raised $75,240.

The handwritten musical phrase “Sherry” from Jersey Boys, signed by Bob Gaudio and the late Bob Crewe,was the top silent auction item, fetching $4,750. As in years past, other musical phrases handwritten and signed by Broadway composers and lyricists were big draws. “Santa Fe” from Newsies went for $2,500 and “Ring of Keys” from Fun Home raised $1,200.

Other silent auction lots making an impact: a Love Letters script and poster, signed by Carol Burnett and Brian Dennehy, raised $4,000; an autographed edition of Eddie Shapiro’s “Nothing Like a Dame,” signed by more than a dozen of Broadway’s biggest “dames,” raised $1,600; and Hedwig and Angry Inch drumheads, signed by its Tony-winning star Neil Patrick Harris, went for $550.

The incomparable Jim Caruso of "Jim Caruso's Cast Party" at Birdland returned to host the table, joined this year by Ben Cameron, host of the weekly benefit show Broadway Sessions at the Laurie Beechman Theatre.

Broadway Cares/Equity Fights AIDS is one of the nation’s leading industry- based, nonprofit AIDS fundraising and grant-making organizations. By drawing upon the talents, resources, and generosity of the American theatre community, since 1988 BC/EFA has raised more than $250 million for essential services for people with AIDS and other critical illnesses across the United States.

Broadway Cares/Equity Fights AIDS is the major supporter of the social service programs at The Actors Fund, including the HIV/AIDS Initiative, the Phyllis Newman Women’s Health Initiative and the Al Hirschfeld Free Health Clinic. Broadway Cares also awards annual grants to more than 450 AIDS and family service organizations in all 50 states.