LIFE OF PI To Open at Broadway's Schoenfeld Theatre 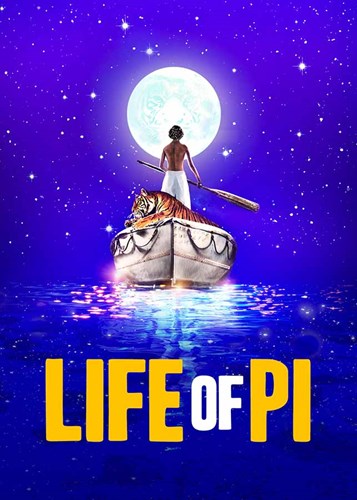 TO OPEN AT BROADWAY’S GERALD SCHOENFELD THEATRE ON MARCH 30, 2023

DIRECTED BY MAX WEBSTER WITH

As a proud partner of LIFE OF PI, American Express® Card Members have access to exclusive pre-sale tickets before the general public beginning Monday, October 24, 2022, at 10:00AM (ET) through Monday, October 31, 2022, at 9:59AM (ET) at Telecharge.com.

“Having started work seven years ago to bring Yann Martel’s much-loved story to the stage, for it to live on Broadway is enormously gratifying,” said Simon Friend, producer of the Olivier Award-winning Best Play, “LIFE OF PI has been so joyously received by audiences young and old in the UK, which is testament to the skill of the large team of artists delivering a show which entertains, and makes you think and feel in equal measure. We can’t wait to welcome audiences on Broadway.”

“It has been such a privilege to adapt Yann Martel’s modern classic LIFE OF PI for the stage. It was daunting, creatively, exciting, and always collaborative. To be able to tell this story the way I imagined it, to create the world using my references and viewpoint has been an extraordinary gift. And to see it resonate with young and old audience members alike has been humbling,” said playwright Lolita Chakrabarti, “It is a beautiful, visceral, magical show, a story of survival which all of us can fundamentally relate to after the effects of the pandemic. I am beyond thrilled that we will bring this play to Broadway.”

Based on one of the best-loved works of fiction – winner of the Man Booker Prize, selling over fifteen million copies worldwide – LIFE OF PI is a breath-taking new theatrical adaptation of an epic journey of endurance and hope.

After a cargo ship sinks in the middle of the vast Pacific Ocean, a sixteen-year-old boy name Pi is stranded on a lifeboat with four other survivors – a hyena, a zebra, an orangutan, and a 450-pound Royal Bengal tiger. Time is against them, nature is harsh, who will survive?

LIFE OF PI is currently playing at Wyndham’s Theatre in London’s West End where it won five Olivier Awards including Best New Play, Best Scenic Design and Best Lighting Design.  In an historic first for the Olivier Awards, the seven performers who play Royal Bengal tiger ‘Richard Parker’ were collectively awarded Best Actor in a Supporting Role. The London production with its cutting-edge visual effects has garnered great critical acclaim.

★★★★★ “Breathtaking. It will make you believe in the power of theater.” – The Times of London

★★★★★ “An extraordinary journey. Unmissable.” – The Guardian

“One of the most visually stunning shows I’ve ever seen.” – Time Out London

Lolita Chakrabarti (Playwright) OBE is an actress and an award-winning playwright. Her debut play Red Velvet opened at the Tricycle Theatre, London, before transferring to St Ann’s Warehouse in New York and then to London’s West End as part of Sir Kenneth Branagh’s inaugural season at The Garrick Theatre. It earned her the Evening Standard Charles Wintour Award for Most Promising Playwright 2012; The Critics’ Circle Award for Most Promising Playwright 2013; AWA for Arts and Culture 2013 and an Olivier Award nomination for Outstanding Achievement in an Affiliate Theatre 2012, as well as many other nominations. Red Velvet is now on the Drama syllabus for A level, is studied at universities in the UK and USA and there have been over twenty professional productions in the USA and beyond, including at the Shakespeare Theatre Company in Washington in June 2022.  In 2019 Lolita adapted the Booker Prize winning novel Life of Pi for the stage, (Sheffield Theatres and Wyndham’s Theatre in London’s West End) for which she won the award for Best New Play at the Olivier Awards 2022, UK Theatre Awards 2019, and WhatsonStage Awards 2019. Other writing credits include Hymn (Almeida Theatre/Sky Arts); an adaptation of Italo Calvino’s Invisible Cities (Manchester International Festival and Brisbane Festival); Stones of Venice, a VR film for New Vision Arts Festival in Hong Kong; she curated The Greatest Wealth (The Old Vic) celebrating 8 decades of the NHS, which was also shown online during the pandemic; she was dramaturg on Message in a Bottle (ZooNation/Sadler’s Wells). Lolita is dramaturg on the forthcoming Sylvia for the Old Vic.  Acting credits include: Fanny and Alexander (The Old Vic); Hamlet (Royal Academy of Dramatic Art), “Vigil,” “Showtrial,” “The Casual Vacancy” (BBC); “Wheel of Time” (Amazon Prime); “Born to Kill” (Channel 4); “My Mad Fat Diary” (E4), “Beowulf; Return to the Shieldlands” (ITV); “Riviera” (Sky); “Criminal” (Netflix).

TIM LUTKIN (Lighting Design) trained at the Guildhall School of Music and Drama.

Carolyn Downing (Sound Design) is an award-winning sound designer working in theatre and across a variety of media, both nationally and internationally. Her work in theatre and live events includes Commonwealth Games Birmingham 2022 Opening Ceremony, Henry V, BLANK, Les Liaisons Dangereuses (also on Broadway), Fathers and Sons, Dimetos and Absurdia (Donmar); Fantastically Great Women Who Changed The World (Kenny Wax); Normal Heart, The Welkin, Downstate (also at Steppenwolf Chicago and Playwrights Horizons NYC), Mr Gum and the Dancing Bear – the Musical!, As You Like It, Our Country’s Good, The Motherf*cker with the Hat, Dara (NT); All My Sons (Old Vic); Death Of A Salesman (Young Vic and West End); Summer & Smoke (Almeida and West End, Olivier Nomination 2019), Chimerica (Almeida and West End, Olivier Award Best Sound Design 2014), Carmen Disruption and Blood Wedding (Almeida); Gypsy, Mother Courage, The Producers (Royal Exchange); The Fantastic Follies of Mrs Rich, Coriolanus, Julius Caesar, Antony and Cleopatra and King John (RSC); Handbagged, White Teeth (Kiln); Me And My Girl, Copenhagen and Fiddler on the Roof (Chichester); A Woman of No Importance (Vaudeville & UK Tour); The Believers, Beautiful Burnout and Love Song (Frantic Assembly); Hope, The Pass, The Low Road and Choir Boy (Royal Court); All My Sons (Broadway). Designs for opera include Benjamin, Dernière Nuit at Opéra de Lyon, How the Whale Became at the Royal Opera House, American Lulu for Opera Group and After Dido for the ENO. Exhibitions include Jean Michael Basquiat: King Of Pleasure presented by his family in NYC, Reimagining Wordsworth for the Wordsworth Trust; Hut 11A: The Bombe Breakthrough at Bletchley Park; So You Say You Want A Revolution? Records & Rebels 1965– 70 at the V&A; Exhibitionism: The Rolling Stones at Saatchi Gallery; Collider at the Science Museum; and Louis Vuitton: Series 3. Carolyn has also created soundscapes for Shawn Mendes’ Illuminate tour 2017 and Louis Vuitton Ready to Wear Collection shows at the Louis Vuitton Foundation and The Louvre, Paris.

Andrew T Mackay (Original Music) is an Olivier Award nominated and award-winning classically trained composer & producer and the co-founder with Garry Hughes of the electronica/world music act Bombay Dub Orchestra.  Andrew studied piano, clarinet, and composition at the London College of Music under Dr Lloyd Webber and John McCabe. His music often fuses orchestral with folk and traditional elements of music from the project’s region and has scored many films in India including the National award-winning Hamid by Aijaz Khan.  Andrew’s company Bohemia Junction Ltd exclusively represents Abbey Road Studios for India as well as the FAMES’ Skopje Studio Orchestra and has provided music services on dozens of films, concerts, and Games over the last decade.  He is the Director of India’s first ever Composers Lab which started in 2013 as part of Mumbai Film Festival in association with Abbey Road, PRS for Music UK and supported by BMI.  The Oliver Award Nominated music soundtrack to Life of Pi was Andrew’s first foray into scoring for theatre which was followed by Henry V with Kit Harington (Donmar) in 2022 and Butter Arms a short film for Royal Ballet/ Royal Opera House.  The soundtrack album to Life of Pi is available on all streaming platforms as well as on CD on the Bohemia Junction Recording Co. label.  www.mackay.at

Jack Bradley (Dramaturgy) is a Literary producer, dramaturg, playwright, and translator.  Previously Bradley was Literary Associate at SFP, and Literary Manager at London’s National Theatre from 1994-2006 advising on the repertoire for Richard Eyre, Trevor Nunn and Nicholas Hytner. From 1989-1994 he worked in new play development at the Soho Theatre.

YANN MARTEL (Novelist) is a Canadian writer. He is the author of a collection of short stories and four novels, most notably Life of Pi, for which he won the 2002 Man Booker Prize. Additional writing credits include The Facts Behind the Helsinki Roccamatios, Self, Beatrice and Virgil, The High Mountains of Portugal and the non-fiction collection 101 Letters to a Prime Minister: The Completed Letters to Stephen Harper. Martel is presently at work on Son of Nobody, a novel about the Trojan War.