From the Shubert Archive: "The Passing Show of 1916" 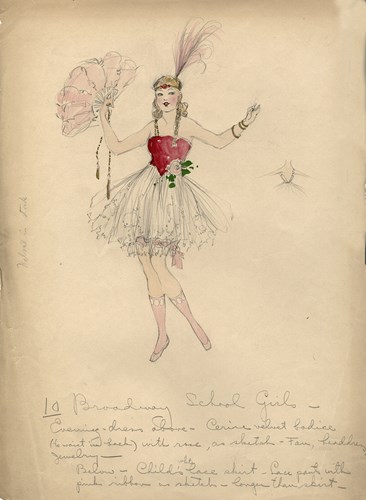 Shubert house designer Homer Conant's costume sketch for the "Broadway School Days" number of The Passing Show of 1916 at the Winter Garden Theatre.  Aside from this number featuring the comely Winter Garden chorus girls, this edition of the Shuberts' annual revue featured satirical sketches on Teddy Roosevelt and Pancho Villa, comedy by Ed Wynn, and an elaborate number called "The Cavalry Charge" which utilized a treadmill and motion-picture special effects.  The now-standard song, "Pretty Baby" was one of the show's biggest hits.  Another of the production's songs, "The Making of a Girl" was one of George Gershwin's first Broadway numbers.